Many investors would have celebrated Warren Buffett as one of the most successful investors of all time. However, much lesser is known about his personal life.

It is hard to imagine how he grew up having trouble in school, to amassing a fortune more than US$73 billion with his holding company – Berkshire Hathaway today.

“Becoming Warren Buffett” – a HBO documentary aired on 31st January 2017, seems to be the first ever attempt to incorporate Warren Buffett’s life chronicles into a single video.

It touches on many remarkable moments from Warren’s life story and how they came together to shape his personality and investment philosophy.

I was really inspired after watching this film and was eager to share 7 interesting things I have learnt from it. You can catch it here on Youtube below.

In the video, Warren Buffett shared an old story of how a person went up to the king and asked for a rice grain to be placed in the checkerboard and a doubling at the adjacent piece.

The king was giving away his entire kingdom by the time he realizes what has happened.

The magic (or logic) behind that is compound interest, coined as the 8th wonder of the world by Albert Einstein.

In fact, do you know that 99% of Warren Buffet’s wealth (more than US$50 Billion) is made after his 50th birthday?

For some mind-blowing illustration, just look at the Warren Buffett’s net worth throughout his lifetime below.

Warren Buffett’s immense wealth comes from the tremendous benefits of the snowball effect through time.

Last but not least, he has mentioned that “compound interest” is the single most powerful factor behind his investing success, and quipped “it can do extraordinary things”.

If you had read about Buffett-related articles, chances are that you would have come across his mentor’s name – Benjamin Graham.

He is famously known as the “father” of value investing, where he believed in careful scrutiny of financial statements; and that if you have bought value, it would eventually prove out.

In his address to a class of students, Warren Buffett said that his teacher shaped his professional life and he learnt 2 principal investing rules from him:

1) Do not lose money 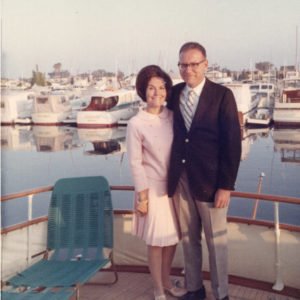 A major part of this documentary takes a peek into Warren Buffett’s personal life and that includes his wife – Susan Buffett.

Below are some highlights from the video.

Throughout the documentary, Warren Buffett frequently attributes his success to his wife, which can still be seen today.

He continues to champion the cause of getting the ultra-rich people to give back to society through charity and political involvement.

In Warren Buffett’s early days, his investment strategy was largely modeled after his mentor.

He deals mainly with thinly traded securities which are cheap statistically but may not have any growth prospects.

People call this the “cigar butt” approach to investing.

A cigar butt found on the street that has a few puffs left in it may not offer much of a smoke, but the “bargain purchase” helps to make it worthwhile.

However, meeting Charlie Munger was a game-changer for Warren Buffett. He influenced Warren Buffett to look for companies with economic moats that can turn into home runs over the long run. This is because the Berkshire Hathaway is growing too big which made investing in small capitalization stocks unrealistic.

In fact, Charlie Munger is the guy behind this famous quote:

Warren Buffett has all praise for Charlie Munger in the video and quipped: “He got a much broader intellect than me and able to condense important ideas into a very few words”.

Buffett was once terrified of public speaking and would throw up. He knew that if he didn’t cure it then, he would never cure it. He also mentioned this remarkable quote: As a result, he decided to join a “Dale Carnegie” public speaking course where he would stand on tables and do all sorts of crazy things.

Buffett credits the class for much of his success as his whole life would have been different if he did not break out of the public speaking phobia.

The two first met in 1991 at a dinner that, Melinda said, Gates’ mother had to convince him to attend.

Shortly after the both of them met, Gates’ Dad asked the two men to write down one word that best describe what would have helped them the most.

They both wrote the each had the same answer: “Focus”.

Despite coming from two different worlds of investing and IT, they nurtured a long and enduring friendship, driven by the many similarities they have such as working hard and the desire to learn more about their environment.

Here’s what Bill Gates have to say about Warren Buffett: “Warren’s ability to size up people and businesses is a pretty magical thing,” and added “we should all be 20% as good as that”.

At the beginning of his marriage, Susan and Buffett had planned that the bulk of his future wealth would go back to society.

Originally, he thought that Susan would outlive him and she would make the big decision on where the money will go to.

However, after her demise in year 2004, Buffett switched gears and pledged to gradually give 85% of his Berkshire stock to five foundations. More than US$30 billion (valued in 2006) will go to the Bill & Melinda Gates Foundation, marking it as the largest philanthropic gift in history.

The remaining portion (17.5 million Class B shares) will be awarded to the foundations started by his 3 children and his late wife Susan.

Furthermore, Warren Buffett and Gates founded the ‘Giving Pledge’ campaign in the year 2010. Famously known as “US$600 Billion Challenge”, the campaign aims to encourage the wealthiest people to pledge at least 50% of their net worth to charity during their lifetimes or at death.

Last but not least, I was truly inspired with this speech of Buffett:

“In my entire lifetime, everything that I spent will be quite a bit less than 1% of what I made. The other 99%+ will go to others because it has more utility than me”. He added, “It would be silly not to transfer this utility to people who can use it”.

The best part of the video is that you don’t have to be an investor or a lover of finance to watch it.

There are many simple life lessons you can pick up such as ‘how to achieve by being dedicated to your work’ and ‘how having a good reputation is really helpful in life’.

To end off, I would borrow a speech Warren Buffett addressed to a class of students towards the end of the video: “The world is a great movie to watch. But you don’t want to just sleep-walk through life. The important thing to do is to look for the job you would take if you didn’t need a job.

Life would be wonderful; you would jump out of bed in the morning because you are looking forward to the day.

I have, for over 60 years, been able to tap-dance to work just because I am doing what I love doing and I just feel very, very lucky.”