Solarvest Holdings Bhd: 8 Things Investors Should Know About It

On 30 September 2S019, Solarvest Holdings Bhd (Solarvest) has opened to all an invitation to subscribe its IPO shares at RM 0.35 per share.

The invitation would be closed on 11 November 2019. You may obtain its IPO Prospectus below:

You may go through nearly 400 pages of the document or alternatively, you can spend 5-10 minutes reading this write-up, where I listed down 8 main things on Solarvest that you may need to know about before you invest.

Solarvest is an Engineering, Procurement, Construction and Commission (EPCC) contractor that specialises in the installation of solar PV systems and large scale solar PV (LSSPV) systems in Malaysia. The company began as a subcontractor of other EPCC contractors for residential solar PV projects in 2012.

Shortly after, in 2013, it had secured projects to install bigger solar PV systems on industrial and commercial buildings. In 2017, it has ventured into LSSPV projects. By 2019, the company has handed over 232 MWp of solar PV systems to its clients, mostly in Northern Part of Malaysia.

Its total amount of installed capacities completed by Solarvest since 2012 is as follows:

This is attributable to additional revenues from a series of LSSPV projects undertaken by Solarvest starting in FY 2018.

Solarvest has lowered its gearing ratio from 186% in 2016 to 62% in 2019 as the company has substantially increased its total equity by retaining its earnings for the last three years.

Also, Solarvest has substantially increased its cash balances by bringing in positive operating cash flows. Its cash and cash equivalents increased from -ve RM 31 thousand in 2016 to RM 12.85 million in 2019 f.

Solarvest intends to raise RM 34.6 million in gross proceeds, where it intends to utilise it for the following purposes: 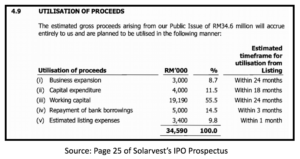 It had allocated RM 0.7 million and RM 2.3 million to expand to South Malaysia and overseas market namely, Vietnam and Taiwan.

First, the RM 0.7 million will be used to recruit staff and set up an office and service centre in Johor to serve customers located in Negeri Sembilan, Melaka, and Johor.

Second, the overseas expansion of RM 2.3 million is intended to be capital for joint ventures to be set up to tender and undertake solar PV projects in Vietnam and Taiwan.

This includes its purchase of project machinery and equipment and an upgrade of its IT software, hardware and office equipment to undertake commercial and industrial solar PV projects and LSSPV projects.

Its full breakdown is as follows:

This includes preparation of tender deposit, on-site expenses for LSSPV projects and purchasing of raw materials for its EPCC services.

The full breakdown of the budgeted working capital is as follows: 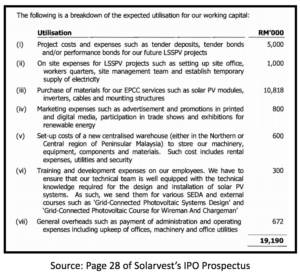 This would result in a cost saving of RM 0.40 million a year based on its existing interest rate of 7.5% for its term loan and 8.2% for its bank overdraft and trade facilities per annum.

Atlantic Blue Holdings Sdn Bhd (AB Holdings) and Chin Hin Group Bhd would be substantial shareholders of Solarvest with 41.1% and 33.6% shareholdings after its listing on Bursa Malaysia.

AB Holdings
Lim Chin Siu and Tan Chyi Boon are substantial shareholders of Solarvest as the two would hold their interest with AB Holdings. Lim is the Managing Director of the company while Tan is appointed as its Executive Director.

Chiau Haw Choon sits in the board as a non-executive director. Chiau is listed as a major shareholder with his interest in Chin Hin Group Bhd.

As at 31 August 2019, Solarvest has accumulated an unbilled order book worth RM 200.1 million which would keep them busy up till FY 2021.

The bigger solar projects are as follows: 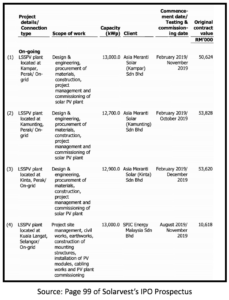 Solarvest is subjected to the concentration risk of customers and suppliers for it derived 68.6% of its total sales in 2019 from its five biggest clients and 65.5% of its purchases made were from its five largest suppliers in 2019.

They are as follows: 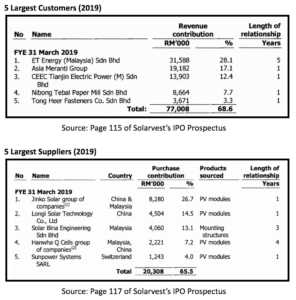 Presently, Solarvest does not adopt a fixed dividend policy.

Solarvest has achieved substantial growth as it undertakes more LSSPV projects starting in FY 2018. This resulted in an impressive growth in its earnings.

Presently, Solarvest’s unbilled order book stands at RM 200.1 million where most of them consists of three large LSSPV projects stated in Point 6. Its future financial results depends greatly on the management’s ability to secure new LSSPV projects in the future.

In my opinion, Solarvest has a consistent track record of the increased delivery of the solar PV systems over the past years. Coupled with the management team’s skin in the game, Solarvest may well become a multi-bagger stock in time to come.