When it comes to Value Investing, Warren Buffett will automatically pop out in many people’s minds. That said, there is also another guy who can be on par with Warren Buffett and his name is Walter Schloss.

Walter Schloss is a legendary value investor, achieving one of the longest and most consistent historical investment track records of 16% annually for 40-plus years.

How will that stack up? Just check out the below picture.

Essentially, Walter Schloss’s strategy is to filter for companies with the below fundamentals:

With that in mind, we look at 3 cheap stocks trading below their book values and see if they may interest Walter Schloss. Some of the major brands that the company owns are such as Gardenia, Cowhead and Farmland. Today, the company has a business presence in  Singapore, Malaysia, Australia, and the Philippines.

**For more in-depth research such as Peer Comparison or Intrinsic Value Analysis, you can Sign up/Renew with Shareinvestor.com. There is a Xmas Deal on-going right now!**

The group’s TTM revenue declined 3.85% to S$815.9 million while its net profit dropped 92.86% to S$6.1 million. According to the latest third quarter report, it was due to the weak performance of Rivalea Limited, which is the group’s integrated producer of meat located in Australia.

About 64% of QAF’s FY 2018 revenue was contributed by Rivalea Limited, which poses a major risk to the group as a whole. In addition, the management mentioned that Rivalea’s business is cyclical in nature and is mainly influenced by general market prices of commodity pork.

As for its outlook, the management provided the following guidance:

QAF limited has distributed a consistent dividend of $0.05 per share in the past 7 years. This indicates an enticing yield of 7.8% based on the last market price of $0.64 as at 21 November 2018.

Centurion Corporation Limited was listed in 1995. It is a global owner and manager of workers and student accommodation assets in Singapore, Malaysia, Australia, United Kingdom and the United States.

The company owns the “Westlite” brand which manages workers accommodation assets. On the other hand, its student housing assets are managed under the “Dwell” brand. 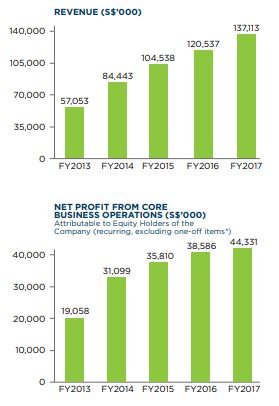 Moreover, its net profit has grown from S$19 million to S$44.3 million in the same period, which was a commendable 23.6% CAGR.

However, the management remains positive for its future growth:

With healthy and supportive industry fundamentals in place, the Group will continue to pursue growth through joint ventures and asset light strategies. Following the successful closure of the Group’s first private fund last year, the Group seek to build on this growth pillar through the potential establishment of a second student housing private fund with like-minded investors.

In addition, Centurion has paid out a dividend of $0.02 per share and a special dividend of 0.5 cents per share in 2017. That would mean a juicy dividend yield of 6 per cent. The company has a strong and extensive manufacturing and distribution network spanning over 10 countries, including a strong foothold in Mainland China.

Revenue for GP Industries has been improving since FY2014. The revenue reached a new record high of S$1.1 billion, which represents a 6% increase compared to S$1 billion in FY2017.

For its outlook, the Chairman commented:

We will continue to build our brands and distribution network. We recognize the strong potential of e-marketing and e-commerce trading platforms and will develop our capabilities in these new sales and marketing channels.

We will also continue to invest in new technologies, product innovation and factory automation to further improve efficiency, productivity and competitiveness.

The company has paid out a dividend of $0.03 per share in FY2018, which is equivalent to a yield of 4.4 per cent based on its last market price.