UWC IPO: 8 Things to Know about it before Subscribing

UWC IPO has launched on 17 June 2019, offering 70 million new shares to the public and an offer of sale of 33.01 million existing shares at an IPO price of 82 sen per share.

Its IPO document can be downloaded here:

Upon its listing, UWC will have a market capitalisation of RM300.77mil based on the issue/offer price of 82 sen and its enlarged share capital of 366.80mil.

Personally, I suggest that you take time to read its IPO document. But, if time is of the essence, here, I have summarized 8 main takeaways on UWC Bhd so that you can decide whether or not you should invest in its shares. 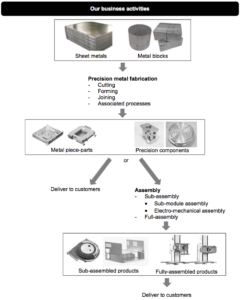 From it, its end-products could either be delivered to its clients or assembled into machine structures, enclosures and chassis before delivery to its customers.

UWC Bhd’s primary market is in Malaysia where it contributed 58.6% of its total revenues in 2018. Its remaining 41.4% of revenues were contributed by exports to Singapore, the United States, France, China and the United Kingdom.

For the last 3 years, UWC Bhd has achieved growth in group revenues, up from RM 76.3 million in 2016 to RM 136.5 million in 2018. It is because the company has received higher orders from its main customers.

UWC Bhd intends to raise RM 57.40 million in gross proceeds. Out of which, the company plans to use it in the following:

UWC Bhd plans to acquire 18 industrial robotic arms and one material handling system to further automate its manufacturing processes, which in turn, reduces its dependency on human labour and production costs. This allows UWC Bhd to enjoy approximately RM 0.9 million in cost savings a year as a result of reduced labour costs in the immediate future.

UWC Bhd has obtained term loans from Public Bank Bhd and Hong Leong Bank Bhd at interest rates of 4.52% and 4.85% per annum respectively. By repaying a total of RM 18.00 million in term loans, UWC Bhd expects to enjoy interest cost savings of RM 0.8 million per annum.

The following is a list of major shareholders of UWC Bhd upon listing:

Both Dato’ Ng and Lau are major shareholders of UWC Bhd through their direct shareholdings in UWC Bhd and majority interests in UWC Capital.

UWC Bhd is subjected to concentration risk as it derived 80.4% of its revenue in 2018 from 5 key customers. Hence, its future financial results are dependent on them. They include:

So, the question remains: ‘Should I subscribe to UWC Bhd’s IPO shares?’