NetLink Trust is a business Trust soon to be listed on the SGX mainboard.

Here is a quick glance into the details of the IPO:

The IPO will represent 75% of the Trust’s total shareholding. SingTel will be withholding the remaining 25%, and also pocket the water-salivating IPO proceeds.

Attached is the preliminary prospectus for your reference.

As of 31 March 2017, its network supported approximately 1.1 million residential and 38,500 non-residential end-user connections in Singapore. Respectively, this accounts for 76.3% and 32% of total market share in Singapore.

Through the IPO, estimated net proceeds will amount between S$2.26 billion to S$2.63 billion. Over-allotment option will bring in an additional S$100 million. The use of the proceeds will include purchase of Singtel’s broadband assets and also repayment of a S$1.1 billion loan to Singtel.

From the prospectus, the Trust experienced both top-line and bottom-line growth for the past 3 years. Its revenue undergone a CAGR of 11.26% from 2015 to 2017 ending March. This is primarily due to an increase in fibre business. Similarly, its net profits more than doubled from 2016 to S$73.7 million to 2017. With regards to its revenue breakdown,

For its loans, it has been relatively steady for the past 3 years, hovering at S$1.61 billion as of 31 March 2017. This enormous figure is expected, considering that a huge amount of capital outlay is needed to establish a nationwide extensive network.

Over the past 3 years, its business has been bringing in positive operating cashflow, increasing at CAGR of 21.19%. However, due to its extensive spending under purchase of property and equipment, its cash pool is a mere S$92.4 million versus the S$1.6 billion debt it amassed.

Total expenses are also forecasted to creep up due to higher depreciation. You can refer to the diagram below. 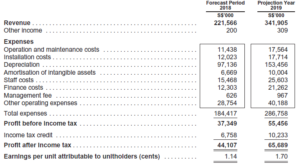 Setting up network to cater to the whole of Singapore requires a huge outlay of capital. Hence, there will be barrier to entry for any potential competitors. Furthermore, the nature of its business will consistently bring in recurring income streams.

The main bulk of its revenue comes from residential connections. From the diagram below, its prospectus predicts subscriptions to increase at CAGR of 6.5% from 2016 to 2021. 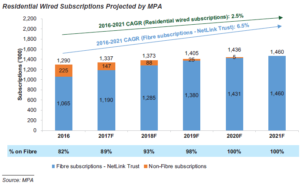 These figures are forecasted to increase over the next few years. Even at its current standing, it is significantly higher than most countries. This will thus reflect a huge continuing demand for NetLink’s services.

Images taken from its prospectus

Its earnings per unit in 2017 stands at 2.06 cents. With that, its P/E ratio will vary between the range of 38.8 to 45.1. I will say that this is relatively expensive, as its P/E ratio fall on the higher end, compared to other Trust in the market.

Investors may also want to take note that as a Trust, it is not mandatory to distribute dividend. This is unlike REITs whereby it is mandatory to distribute at least 90% of disposable income to the unit holders. Therefore, if you are more risk-averse and looking for passive income, you may want to consider investing in REIT instead.