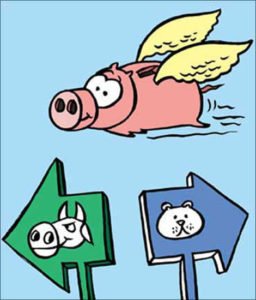 That said, it would be a mistake to assume that large companies can’t fall victim to similar issues. Just take a look at a blue chip – Commodities trading firm Noble Group (SGX:N21)as it fell from a peak of S$2.20 to less than S$0.20 recently.

In this post, I’ll outline the 3 BIG advantages of investing in small caps versus bigger companies, and some of the extra risks as well.

Before a company like Microsoft became the blue chip technology darling it is today, it also started off as a small business once upon a time. The same holds true to almost all major companies (other than companies which are privately funded up till the point of IPO).

An individual who invests in small cap stocks basically has the opportunity to uncover a hidden gem, before it explodes in value and its stock prices catapult>100%.

In addition, it’s relatively easier for a small company to double or even triple its sales as compared to a billion-dollar company. This brings us to one quote from Warren Buffett:

“If a business does well, the stock eventually follows.”

In short, when the company deliversexponential growth, the share price has nowhere to go but up.

As a result,there is often a lack of coverage on quality small cap stocks until they have run up in price. One example is Best World. It skyrocketed from S$0.215 to almost S$1.90 before the analyst reports start to pile in, giving higher target prices north of S$2.

In short, many of these small companies are like diamonds in the rough, waiting for the right catalysts to pull them into the spotlight. This serves as a tremendous opportunity to any investor who is willing to stick with it over the long run and the re-rating of the stock to come.

Taking a clip out of history, small cap value stocks outperform their larger counterparts by a wide margin. Just take a look at the picture above – $10,000 invested in large cap growth stocks during year 1926 would result in S$10 million in 20xx but an astronomical S$1,000 million for the average small cap value stocks!

While investing in small cap stocks may be considered by some, a risky affair, there’s no denying that their benefits far outweigh the risks. As an investor,one should appreciate the fact that the small cap territory is relatively less crowded and easier to understand. Companies like Jumbo Group Ltd (SGX:42R) and 800 Super Holdings Ltd (SGX:5TG) are 2 good case studies.

Consequently, you may be able to gain an upper hand when it comes to analyzing the companies and get in before the ‘train leaves the station’. What’s more, the promise of significant growth and future profits is enough reason to capitalize on such stocks as long-term investments. Who knows, you might just discover the next Walmart or Amazon.