Temasek Holdings Stocks: 8 Big Names You Should Take Note Of

For those uninitiated, Temasek Holdings is Singapore’s sovereign wealth fund with AUM north of $380 billion and growing bigger each day.

Founded in 1974, it transformed itself to be one of the biggest investors in the world and has the opportunity to do many early Private Equity deals.

Its portfolio spans across different continents with its main portfolio in Singapore, China, the Americas, and Europe/Middle East/Africa respectively.

There are over 100 companies in Temasek’s portfolio and we have cherry picked 8 Temasek Holdings stocks that you should take note of! As of its latest quarterly results, DBS’s revenue decreased by 4% to $2.3 billion. Its net profit increased by an amazing 72% to $2.0 billion. This was due to the reversal of allowances provided during COVID.

The group’s non-performing loan dropped from 1.6 to 1.5, which shows the credit resilience of DBS’s portfolio. Moreover, MAS has also lifted the dividends requirements recently on local banks. Dividend yield of DBS might go back to its original 5%, which will be very appealing to dividend hungry Singaporeans. 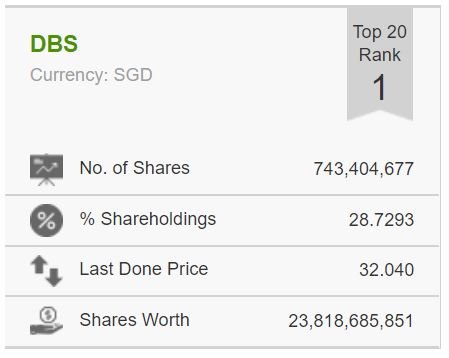 Singtel is Asia’s leading communications technology group, operating in a dynamic region that is undergoing rapid and unprecedented digital transformation. Together with Optus and our regional associates Airtel, AIS, Globe and Telkomsel, it provides an extensive range of telecommunication and digital services across 21 countries.

Singtel is not the only telecom company getting disrupted by new entrants such as Circles Life and TPG from Australia.

However, Singtel has taken note of these changes and have taken steps to conduct a strategic initiative targeting growth in the 5G area and digital solutions. There are also sizable divestments along the way which free up capital for the growth areas. 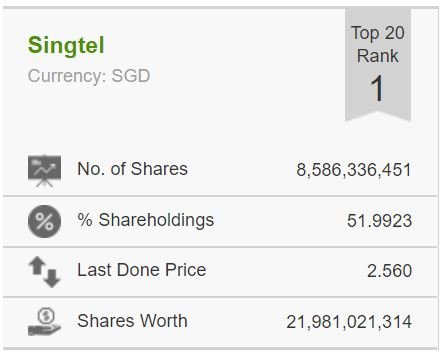 SGX is a renowned company in Asia as it not only has equities listing, it has also ventured into commodities and data sales.

SGX has continued to reinvent itself by moving with the market and taking up more roles in derivatives – be it on Equities or on Commodities. 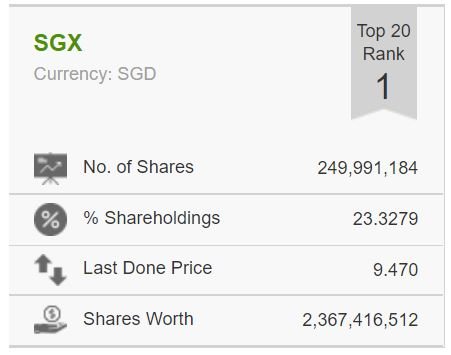 Temasek is the largest shareholder of SGX and holds approximately 23.3% SGX’s total share. SGX makes up about 0.78% of Temasek’s AUM. 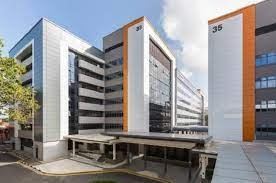 As at 30 June 2021, MIT’s total assets under management was S$6.7 billion, which comprised 86 properties in Singapore and 28 properties in North America (including 13 data centres held through the joint venture with Mapletree Investments Pte Ltd).

MIT’s mother company, Mapletree is one of the biggest real estate development, investment, capital and property management companies headquartered in Singapore. Temasek is one of its biggest shareholders and Temasek invests in its subsidiary whenever the opportunity arises. 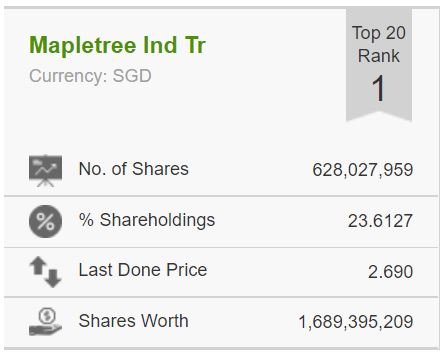 Temasek is the largest shareholder of MIT and holds approximately 23.6% MIT’s total share. MIT makes up about 0.5% of Temasek’s AUM. SATS is Asia’s leading provider of food solutions and gateway services with 13,000 employees delighting customers in over 55 locations and 13 countries across the Asia Pacific, UK, and the Middle East.

SATS has suffered greatly during COVID as flights and travelling have been cancelled. With travelling restrictions in placed, basically the main bulk of revenue of SATS have been cut. The good news is that with populations around the world getting vaccinated, travelling would return soon.

Moreover, SATS have also started to diversify into frozen food production which would provide a new stream of revenue. 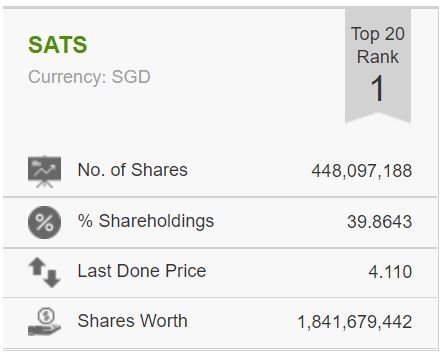 Temasek is the largest shareholder of SATS and holds approximately 39.8% SATS’s total share. MIT makes up about 0.5% of Temasek’s AUM.

SATS last closed at $4.11 and doesn’t have a P/E ratio due to losses incurred in the past year. BlackRock is one of the world’s leading asset management firms and a premier provider of investment management, risk management and advisory services to institutional, intermediary and retail clients worldwide.

It offers a range of solutions — from rigorous fundamental and quantitative active management approaches aimed at maximizing outperformance to highly efficient indexing strategies designed to gain broad exposure to the world’s capital markets.

The most noteworthy aspect of Blackrock is that it has an operating margin of 40.1%, which is exceptional in the finance world.

Blackrock is the biggest investor in the world with AUM under the company approximately at USD 8.68 trillion. Its investments stretch across different continents, industries and assets. It has its own ETFs, funds, etc. 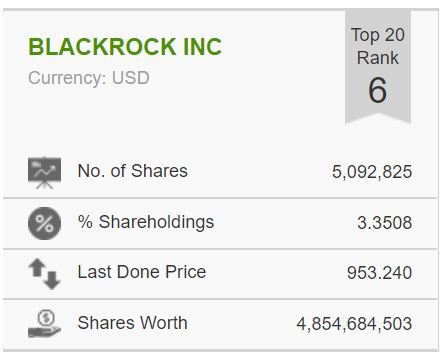 Temasek is the sixth largest shareholder of Blackrock and holds approximately 3.35% of Blackrock’s total share. Black makes up about 1% of Temasek’s AUM. 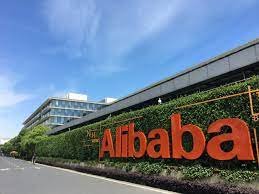 In addition, Ant Group, an unconsolidated related party, provides digital payment services and offers digital financial services to consumers and merchants and other businesses on our platforms.

An ecosystem has developed around our platforms and businesses that consists of consumers, merchants, brands, retailers, third-party service providers, strategic alliance partners and other businesses.

Alibaba continues to reinvent itself by expanding into other businesses such as cloud platform and financials.

It has not forgotten its roots in the e-commerce industry and is always aggressively expanding into new regions such as Southeast Asia.

Notably, it has acquired Redmart and Lazada in the Southeast Asia region. The immense presence of Alibaba in the Asia region is felt by many tech companies in Singapore. 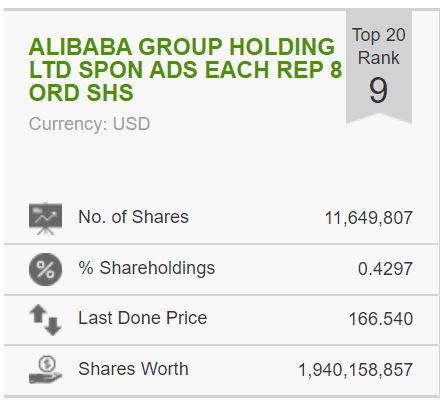 Temasek is the fifteen largest shareholder of Alibaba and holds approximately 0.44% of Alibaba’s total share. Alibaba makes up about 0.6% of Temasek’s AUM. PayPal has remained at the forefront of the digital payment revolution for more than 20 years.

By leveraging technology to make financial services and commerce more convenient, affordable, and secure, the PayPal platform is empowering more than 400 million consumers and merchants in more than 200 markets to join and thrive in the global economy.

It is in the continual expansion into other continents and countries such as South America, Asia, etc. Moreover, Paypal was the first few payment company that took up cryptocurrency in its portfolio.

This shows the forward looking management that Paypal possesses. 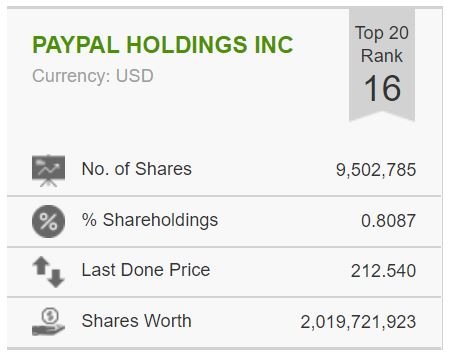 Temasek is the seventeen largest shareholder of Paypal and holds approximately 0.81% of Paypal’s total share. Paypal makes up about 0.6% of Temasek’s AUM.

There are of course many more holdings as seen below.

This is found in ShareInvestor WebPro’s ownership feature so do sign up for the membership here if you’re still not one!

If you want to copy the success of Temasek Holdings, there’s even a better candidate – Billionaire Warren Buffett, arguably the most successful investor of all time.

Check how you can learn the secrets to Warren Buffett’s investment success by downloading the Free Guide below: