MTAG Group Bhd’s IPO: 7 Things to Know about it

On 19 August 2019, MTAG Group Bhd (MTAG) has extended an invitation to the public to subscribe its IPO shares at RM 0.53 a share.

You may download a copy of its IPO documents with the links below:

So, should we invest in MTAG at a price of RM 0.53 a share today? Here, I’ll summarise my findings as follows:

It operates from a facility on a piece of land measuring 107,637 sq. ft. at Tebrau in Johor, Malaysia. The facility is equipped with:

MTAG’s financial results are as follows:

MTAG has increased its revenues significantly in 2017 for it had received higher orders for its mesh products from Dyson to manufacture its vacuum cleaners.

It had also received higher orders for its tapes and adhesives from Dyson for they are used to produce new hair dryers and bladeless fan models.

MTAG intends to raise RM 72.2 million in gross proceeds from this IPO.

From it, MTAG plans to utilise it with the following below:

MTAG intends to buy 10 acres of land (435,600 sq. m) in Senai or Tebrau area to construct a new manufacturing plant to house its new corporate office, grow its production lines and warehouse spaces. It plans to build it in two phases. Phase 1 covers 200,000 sq. m. and Phase 2 covers the remainder of the land.

As I write, MTAG is still in the midst of identifying its suitable land.

MTAG will buy more machineries from China, Taiwan and Japan to substantially increase its production capacity. They are as follows: 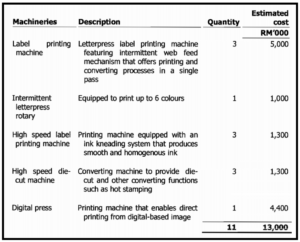 It incurs an average of 5.0% interest rates per annum from these facilities. Thus, it intends to save RM 0.5 million per annum in interest costs after it repays RM 10 million in bank borrowings.

They are as follows: Upon the IPO, the major shareholders of MTAG are Chaw Kam Shiang and Lau Cher Liang with 50.5% and 16.7% shareholdings respectively.

Chaw retains his position as its Managing Director. Lau is the Executive Director of the company.

MTAG is subjected to the risk of customer concentration as it is now deriving as much as 71.1% of its total revenues from five main customers.

Out of them, the company has derived 52.7% of its total revenues from its main customer, which is Jacob Filter System Sdn Bhd. The list of the five key customers are as follows:

Except for Technocom Systems Sdn Bhd (2.2%), the top five customers of MTAG are suppliers of Dyson. Therefore, Dyson is influential to the financial results of MTAG in the future.

The board is adopting a dividend policy to pay out at least 20% of its profit after taxes which are attributable to shareholders to its investors in dividends.

MTAG has delivered growth in revenues and earnings for the last three years. It has reduced its gearing ratio and boosted its current ratio in that 3-year period.

MTAG has an ambitious growth plan as stated in its IPO document. The thing to consider is Dyson as it remained influential to MTAG’s future performance. So, will you invest in MTAG’s IPO shares at RM 0.53 a share? I’ll leave you to decide.