On 10 June 2021, IGB Commercial REIT released its IPO Prospectus and as such, is extending an invitation to subscribe its units at RM 1.00 per unit.

Based on its number of units to be issued of 2.307 billion, IGB Commercial REIT shall have as much as RM 2.307 billion in market capitalisation upon its IPO listing.

Otherwise, you may spend 5 minutes here as I had summarised 15 main points to know about IGB Commercial REIT before investing.

IGB Commercial REIT shall be listed with 10 office buildings which are valued at RM 3.16 billion. Thus, it would be the largest standalone office REIT in Malaysia upon its listing. Of which, 7 of its properties are located within MidValley City. 3 of its remaining properties are located at the Golden Triangle of Kuala Lumpur.

In 2020, IGB Commercial REIT derived income from a pool of 284 tenants.

From them, its top 10 tenants have occupied 23.0% of its net lettable area (NLA) and contributed 21.9% of its gross rental income. IGB Commercial REIT has a substantial amount of tenancies, whose tenures are 3 years. Ever since, it had downsized its space to approximately 32,000 sq. ft., thus, ceasing to be among its top 10 tenants. Instead, B&M Consultancy Services Sdn Bhd (B&M) would replace Subsea to be among the top 10 tenants of IGB Commercial REIT.

The following is a breakdown of its NPI in 2020: In 2018-2020, IGB Commercial REIT had maintained around RM 100 million per annum in distributable income.

Upon listing, IGB Commercial REIT shall have RM 850.9 million in borrowings. It works out to be a gearing ratio of 26.3% of its total assets of RM 3.23 billion.

As the limitation of gearing is set to be at 50% of a REIT’s total assets, the REIT would have approximately up to RM 766.5 million in debt headroom to capitalise on other opportunities in the future. 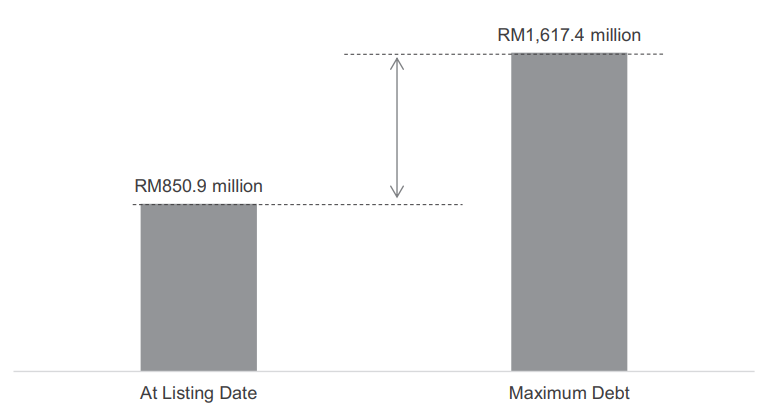 IGB Commercial REIT had revealed that it plans to distribute at least 90% of the REIT’s distributable income on a half-yearly basis, where the intervals are:

IGB Commercial REIT will not receive any cash from its IPO offering.

Instead, IGB Commercial REIT estimated that it will incur RM 7.7 million in costs for listing units on Bursa Malaysia.

Upon its listing, IGB, its sponsor would continue to remain its largest unitholder of IGB Commercial REIT with 50% unitholdings in it.

Dato’ Seri Robert Tan Chung Meng is designated as the Managing Director of its REIT. He is among the list of its substantial shareholders with his interests in IGB and Tan Kim Yeow Sendirian Berhad.

In 2020, IGB Commercial REIT offered rental reliefs to about 150 tenants whose businesses were affected by the COVID-19 pandemic, totalling RM 4.4 million.

Please do note that there is a 10% withholding tax on the taxable portion of the DPU declared.

Thus, IGB Commercial REIT offers investors an opportunity to gain exposure in a portfolio of office buildings in Kuala Lumpur.

IGB is an experienced sponsor and has decades of experiences in the Malaysian property market.

It is important to consider the impact of COVID-19, upcoming supplies of office buildings in Kuala Lumpur, and key valuation metrics before investing into it.