As a follow-up to the poll conducted on our Facebook page, the next contender after Chin Well Holdings is none other than UMS Holdings Ltd.

So what does this stock has in store for you? Read on to find out more!

UMS Holdings (SGX: 558) is an investment holdings company which specialises in manufacturing high precision front-end semiconductor components and perform complex electromechanical assembly. Aside from semiconductor industry, the company also caters to other industries such as electronic, machine tools, aerospace and oil & gas industries.

Being in the industry for more than 20 years, its operations run in Singapore, Malaysia and the United States. The company’s market capitalisation last stood at S$377.65 million.

On behalf of our readers, we went through the company reports & news and discover 5 factors which make UMS Holdings an attractive company.

Its business has also been generating positive free cashflow over the same period, averaging at S$29.3 million annually. You can refer to the diagram below (taken from its latest financial report) on its cashflow position over the past 5 years. 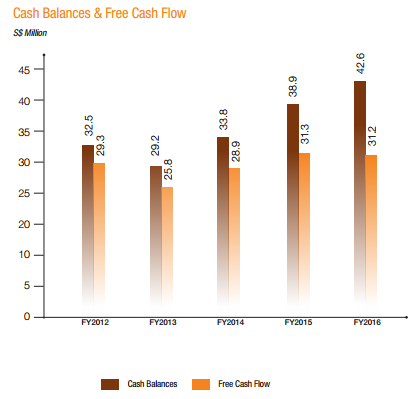 As of 31 December 2016, its cash and cash equivalents pool stood at a whooping record of S$42.6 million. From its financial report, this displayed strong potential for the company to “perform merger and acquisitions activities as well as to undertake new projects as and when suitable opportunities arises.”

The company has not been taking on any long-term debts over the past 5 years. Its current borrowings in 2016 is negligible at S$19.0 million and UMS has totally no problem paying that off with net profits standing at S$22.6 million and cash holdings 2.24 times its debt obligations. To top it off, its retained earnings pool currently stands at S$63.8 million, an impressive 3.36 times of its debts!

Here’s a piece of good news for the dividend hunters.

UMS Holdings has been paying a yearly dividend of $0.06 for the past 6 years (With exception of S$0.05 in 2013 compensated with $0.065 in 2014). This will translate to an estimated dividend yield of 5.6%. With its strong operating cash-flows, the company would not have an issue delivering consistent dividends over the next few years.

In terms of growth prospects, the company has been actively seeking diversification for its businesses. On 24 February 2017, it has entered into a conditional agreement to subscribe to 51% enlarged share capital of Kalf Engineering for a total consideration of S$990,000 in cash. Kalf Engineering is a company which provides water and chemical engineering solution for industries such as oil & gas, power generation and chemical industries. You can read up more on them here.