Many gurus have mentioned time and again that Investing has to be boring so that it is profitable; just like George Soros with his quote: 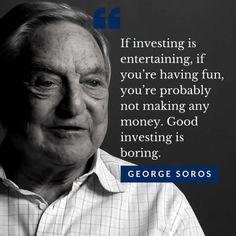 However, at Berkshire Hathaway’s annual shareholder meeting on 4 May 2019, a young shareholder asked Warren Buffett about his favorite investment outside of the conglomerate.

The legendary investor replied, “Usually the ones where you make the most money” but then added;

His most “fun” investment was an investment in Atled Corp., a duck-hunting club of 100 members that agreed to purchase land in Louisiana. It later turned into an oil field.

“Atled had 98 shares and I bought one,” said Buffet who noted that the company’s name was Delta spelled backwards.

The “company” had just been 100 guys from St. Louis who had put in $50 each — two defaulted, hence the 98. It was later called the Delta Duck Club.

“They shot ducks, but apparently someone shot into the ground and oil sprouted out,” Buffett said. They decided to rename the company Atled — “delta” backwards.

Buffett said that the company eventually sold out to an oil company. The shares had gone from $100 to $29,000 per share in just a few years, when Buffett bought. At the time, the company had $20,000 in cash per share and was earning royalties of $11,000 — making it very attractive.

“If they kept it that stock might’ve been worth $2 or $3 million a share,” Buffett said.

As for me, my favourite investment would be Activision Blizzard.

For those who are not sure what this company is about, it is the one of the world’s leading game publishers with games such as World of Warcraft, Starcraft, Overwatch, Call of Duty and Candy Crush etc.

While i have always heard about the company through my Motley Fool subscription and my investor friends, what tipped me to buying it was the launch of Overwatch back in 24 May 2016.

I can still recall vividly on how many of my friends bought the game outright although it costs like 50USD or something.

And it was wildly popular and looked upon as the next upgrade of 1st shooter game combining elements from Counter-Strike + Dota.

After observing and playing Overwatch for around a month, I invested in Activision Blizzard’s shares at around US$39.43 in June 2016 and initially planned to hold it for long term due to the following investment merits:

All in all, it was a fun investment because I was experiencing with the products of the same investment i made. The feeling is just like buying bread at BreadTalk. And to top it off, I made around 90% gains in 2 years – pretty good returns in my opinion.

But enough about me… How about you? What is your favourite investment?

Comment below or send us an email to smallcapasia@gmail.com and we will feature your story here as well!