On 6 March 2018, Wegmans Holdings Bhd (Wegmans) has made its maiden entry into the ACE Market of Bursa Malaysia. Its shares, which were offered at IPO price of RM 0.29 a share, have been well-received as these shares had been oversubscribed by a multiple of 16.35 times.

If you have missed the boat, don’t worry. As I write, Wegmans’ stock price is trading at RM 0.25 a share, a slight drop from the IPO price. Based on a total of 500 million shares, Wegmans today has a market capitalization of RM 125 million.

Here, I’ll share 7 main things that you need to know about Wegmans before you invest.

Wegmans was founded in 1994 by three partners namely, Keh Wee Kiet, Law Kok Kim (Collin) and Oon Leng Hin. It started its operations from a factory with a built-up area of about 2,000 sq. ft. in Muar, Johor. Shortly, Oon ceased to be a partner and the business is managed by Keh while Collin remained as a silent partner at that point of time.

Subsequently, in 2004, Wegmans has enlarged its production floor spaces to 18,000 sq. ft. in order to cater to rising sales orders.

One year later, Collin has decided to join Wegmans as its Executive Director where he set up its sales & marketing department and oversees the company’s finances & administrative affairs. Keh directed his focus to production & procurement activities.

Then come 2010, Wegmans had completed its construction of Block C on the piece of adjoining land acquired in 2006. Thus, it moved its packing, storing and also its loading area to Block C, a factory that has built-up area of 42,846 sq. ft. in the same year. 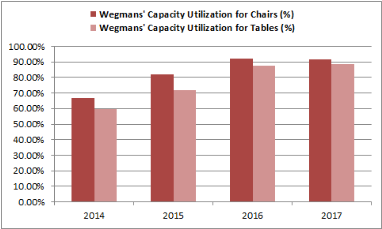 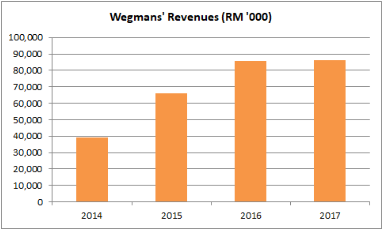 Wegmans had raised gross proceeds of RM 29 million from issuing shares at IPO price of RM 0.29 a share. The management intends to utilize it for:

Wegmans had identified several key risks which might negatively impact its financial results in the future. They are:

As mentioned, Wegmans is trading at RM 0.25 a share at the time of writing. Thus,

Evidently, Wegmans had came a long way as it expanded its production from a 2,000 sq. ft. factory in 1994 to its current facility that houses three factories with a combined built-up area of 148,198 sq. ft.

Wegmans had just raised RM 29 million from its IPO and is still in its early phase of carrying out its plans to grow in the future.

Despite several risks mentioned in Point #6, Wegmans had laid its foundation and will continue to uphold its vision to become one of the leading international furniture manufacturers in Malaysia.

Do you want to calculate a stock’s intrinsic value in less than 10 minutes? Download this Free Stock Intrinsic Value Calculator to check if the Stock is Undervalued. Even comes with a Step-by-Step instruction manual for you too!