If you have not heard of the recent IPO talk in town, time is running out. So what is it all about?

Kimly, better known by its household name of 金味, is offering 173.8 million new shares at a price of $0.25 apiece. Among its launch, 3.8 million shares will be made available for the public. The deal will put Kimly’s market cap size at about S$288.7 million. And yes, time is ticking because the offer will close at 12pm on March 16th.

This is what you need to know about Kimly in 5 minutes.

First, let us understand the nature of the business. Kimly mainly operates and manages coffee shops and foodcourts, under the brands of “Kimly” and “Foodclique”. It basically runs on two segments, outlet management and food retail. Under outlet management, it collects rents from its 64 food outlets, which include 56 coffee shops, 3 industrial canteens and 5 food courts. Under food retail, it runs a total of 121 stalls that sells food under its own brand.

Next, let us look into its financial performance. Over the last 3 years, its revenue has been undergoing a 7.6% annual growth rate from S$148.9 million in 2014 to 172.2 million in 2016. Likewise, its profits experience an annual growth of 9.9%. Below are the graphs obtained from its offer document. 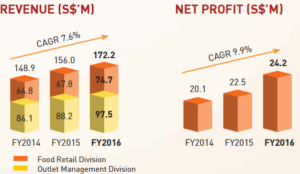 Whereas for its retained earnings, we have generated a graph based on the figures provided in the document. There is a dip in retained earnings of 27% from 2015 to 2016. This is mainly due to a huge increase in payment of dividends declared to then-existing shareholders of its subsidiaries.

It has a pristine balance sheet with no borrowings and majority of its Assets in CASH (S$29.4 million out of S$43.9 million)! It will be further boosted to S$74.5 million after the IPO!

Those fond of a steady flow of dividends would be pretty interested in Kimly. The firm has been generating positive operating cash-flows over the past 3 years with the figure hovering consistently between S$22 million to S$28 million. There is minimal capital expenditure and the the company has mentioned that they only need to set aside provisions for restoration costs (the renovations for each coffeehouse are done every 10 years).

Lastly, the company intends to declare an annual dividend of not less than 50% of their net profits attributable to shareholders as dividends. This would translate into an estimated dividend yield of 4.2% based on the IPO price of S$0.25.

Kimly is looking to raise about $40.4 million of net proceeds from the IPO.

An estimated amount of S$30.4 million (~70%) will be used for acquisitions and joint ventures, accompanied with the establishment of new food outlets.

Kimly plans to utilizing another S$5 million (11.5%) to expand its central kitchen to double its current output capacity, in line with the company’s efforts to improve productivity.

In addition, they are making a launch into the online food ordering and delivery services via Deliveroo and i believe that it will give their bottom-line a crucial push.

To sum it up, Kimly Ltd has many favourable things going for them:

I took a look at the analysis by other financial bloggers and found that they give pretty good reviews on the IPO as well. Many people have taken to Investingnote (Follow me here – https://www.investingnote.com/users/smallcapasia#/) to show that they have invested in the IPO too. As such, it is highly likely to have a big jump on its debut. Stay tuned!

To know more, feel free to check out their IPO prospectus here.