Frencken Group Stock Review: Riding on the tailwinds of the semiconductor industry

A 52-week low is a common technical indicator used by some traders and value investors. It is because of the perception that the stocks are oversold temporarily and poised to rebound once things get better.

That said, it doesn’t mean that a stock shows good value just because its trading at 52 week low. Here are 3 important things investors should check further when a stock price hits 52-week low as shown on investor-one.com.

Firstly, the most fundamental question is to check out the reason behind the share price drop. Is the share price decline due to mismanagement of the business, causing a permanent decline in value?

Or is it caused by temporary poor market conditions that will rebound back to the normal soon? If it’s the former, investors may need to steer far away from the company.

But if it’s the latter, investors may do more research to take advantage of such mispriced opportunities.

2. Can they recover from it?

More often than not, stocks that keep making new 52 week lows are companies that have deteriorating fundamentals with hefty amounts of debt.

One good example would be the fall from grace of Noble group (CGP.SI). Once considered as a blue chip stock due to its inclusion in the STI Index, it incurred massive debt, has a poor business model and negative cash flow.

Without further ado, here are 3 obscure stocks trading at/near their 52 weeks low in the past month or so. 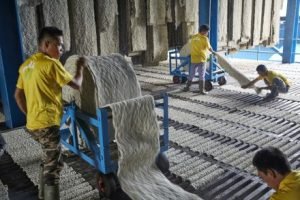 Halcyon is headquartered in Singapore and listed on the Singapore Exchange. Its key operating assets are in Indonesia, Malaysia, Thailand, China and Africa. Tey are supported by a network of logistics assets, storage and terminals, laboratories and sales offices in Southeast Asia, China, South Africa, Europe, United Kingdom and the United States of America. Halcyon main operations are in the growing, sourcing, processing and distributing of rubber.

As of its latest half-yearly report, Halcyon’s revenue decreased by 15.5% to $770.2 million. Its net profit was negative and came in at $45.6 million. Free cash flow came in at a $70 million. Cash balance of the company was at a healthy level of $112 million.

The stock price dropped to its 52 weeks low on 25th August, which was at $0.205. The stock fell significantly from the start of the year at $0.450 to its current levels.

Halcyon last closed at $0.210. P/E valuation is not meaningful as the profits were negative and the company did not distribute dividends last year.

Second Chance is a locally owned company with businesses in 4 areas. Its 4 core businesses are property investment, retailing of apparel, retailing of gold jewellery, and investing and trading in financial instruments.

The stock price dropped to its 52 weeks low on 8th September, which was at $0.165. The stock fell significantly from the start of the year at $0.271 to its current levels.

Heeton is a real estate company focused on property development, investment and management. It has business presence in Singapore, Thailand, Australia, Japan, Malaysia, Vietnam and the United Kingdom.

As its latest annual report, Heeton’s revenue decreased substantially by 56.6% to $12.7 million. Its net profit turned negative to $8.9 million. Free cash flow came in at a negative $16 million. Cash balance of the company was at a sustainable $58.6 million.

The stock price dropped to its 52 weeks low on 8th September, which was at $0.184. The stock fell significantly from the start of the year at $0.315 to its current levels.

Heeton last closed at $0.315, values it at a dividend yield of 1.6%. P/E is not meaningful due to the negative profits.