3 Exciting Small Cap Stocks to Add to Your Watchlist

In this article, we will be featuring 3 small cap stocks that investors should look out for highly-potential turnaround situations.

All of them had recorded losses in particular year and were able to turnaround and deliver growing profits.

Check out these exciting stocks before they are discovered by the market!

Koda Limited was founded in 1972 as an original design manufacturer for home furniture. It owns the Commune retail brand and has 43 stores in China currently. The group’s retail business was actually started in 2011 with the opening of the first Commune outlet in Singapore.

Over time, Commune has expanded its business to overseas in China through a dealership model. The company provides dealers with intellectual property, technology and supplying its ODM products at wholesale prices without charging royalty fees.

Commune is focusing on targeting the younger generation, who have a preference for modern designer furniture.

I have visited its website, and their modern designer furniture seems pretty appealing to me. 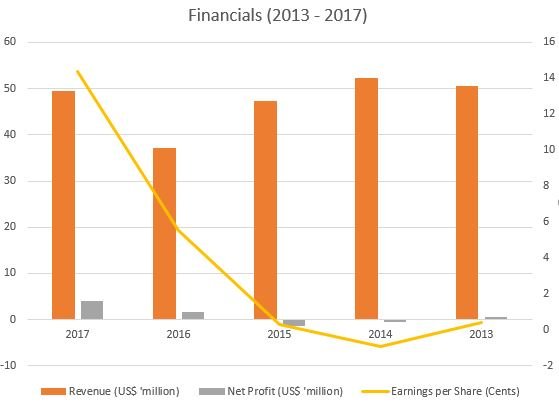 According to its latest quarter’s results, Koda also demonstrated impressive growth in net profits in tandem with the revenue. In 3Q2018, profits were up 261% to US$ 1.17 mil on a yoy basis.

In the near future, Koda plans to double the number of its outlets in China in 2 years time to 100 by 2020. By teaming up with a trade development agency, IE Singapore, Koda is able to increase sales and knowledge of their customers through digital marketing and analytics.

On top of that, something interesting caught my attention.

Koda is going to leverage on visual reality technology to make its business stand out among the competition. By equipping its Commune China stores with VR capabilities, it enables their in-house designers to turn a customer’s floor-plan into a VR environment.

With this technology, the company is able to offer recommendations on the design concept and boost its sales and improve customer retention.

Hong Lai Huat Group Limited (HLH) is a real estate and property developer with 30 years of track record. It was established in 1988 and has completed numerous projects in Singapore.

Ranging from the public and private residential developments to commercial industrial buildings, HLH is well-experienced in the real estate and property sector. In 2008, HLH has since developed a 10,000 hectares cassava plantation farm property with a cassava starch factory.

The Group’s Property Division is also developing its first mixed development project in Cambodia known as D’Seaview, a freehold project that consists of 737 residential units and 67 commercial units. It recorded a net profit of S$2 million in 2017, which was significantly lower compared to S$6.3 million in 2016 due to FX translation losses. 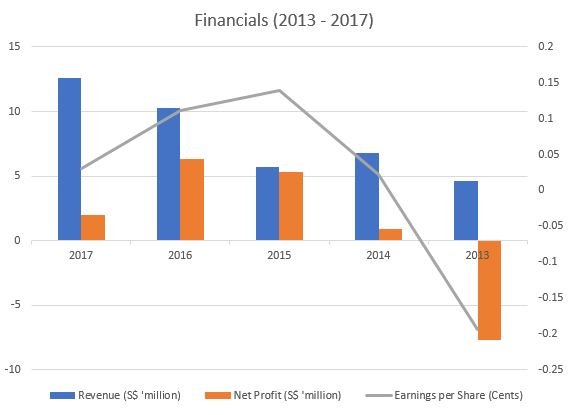 Last Friday, Singapore’s government has announced fresh clamps on the private residential property. The move includes increasing foreigners’ stamp duty and raising the tax for Singapore citizens and permanent residents for purchases beyond their first home.

These newly implemented measures would affect some property companies in Singapore but it was not the case for HLH. From the snapshot below, we can see that HLH was actually deriving more than 90% of its revenue from Cambodia.

The growth drivers for HLH in the near future are the completion of D’Seaview’s commercial and residential in the second quarter of 2018 and first half of 2019 respectively.

For your information, D’Seaview is located in Sihanoukville, which is a popular tourist destination and has the biggest Special Economic Zone (SEZ) in Cambodia. You can see the opening ceremony here.

GSS Energy Limited is involved in the precision engineering and energy businesses. It operates through three segments: Mechanisms, Microshafts, and Oil Extraction.

The Microshafts segment manufactures and sells high precision shafts. The Oil Extraction segment engages in the drilling and distribution of oil. 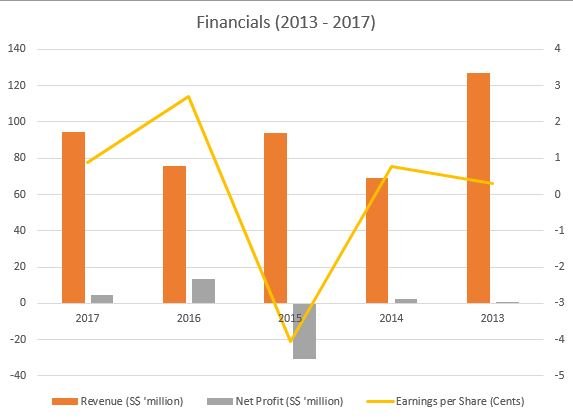 GSS Energy’s revenue rose by S$18.6 million from S$75.7 million in 2016 to S$94.3 million in 2017. The increase in revenue was supported by the precision engineering business from higher orders placed by new and existing customers.

However, the company recorded a lower net profit of S$4.36 million compared to S$13.46 million in 2016 due to higher corporate expenses and losses from FX volatility. The company was making a net loss of S$29.8 in 2015 due to an impairment loss following a termination of a cooperation agreement.

The reason why we are optimistic about GSS Energy is because the Group is nearing the commercialization of hydrocarbon found in Well SGT-01 at the Trembul Operating Area that should contribute to the O&G business positively in 2018.

In short, they are about to start selling oil, taking advantage of the oil price increase recently!

In the near future, GSS Energy is planning to acquire land in Batam and build a factory there for S$8.04 million. The factory will house manufacturing and production operations of its precision engineering business.

When fully utilised, the new facility will raise the company’s capacity by about 60% as they are expecting more order inflow from both existing and new customers. Besides that, the acquisition will result in cost savings and boost its margin in the long run as they are currently renting factory at Citra Buana Industrial Park 2, which is a major expense for the company.

However, the company has committed plans to reward its shareholders with a 20% dividend payout ratio of operating profit for the next 2 years. This means that the company is optimistic about its future developments too.

Fancy more stock ideas like the above? Visit our Stocks’ Database for FREE here – http://bit.ly/InvestorsExchange.

That aside, do you know that Master Investors like Warren Buffett has his own Unique Investing System which you can emulate yourself? We have distilled it into a simple 10-Step Checklist for you to decide how or when to buy/sell your stocks.